Small terracotta doll, featuring a girl whith hair arranged in plaits on both sides of the head, wearing a polos, from which a veil falls down and covers the whole body; arms and legs, which were independent pieces, are lost; tiny holes beside both shoulders were intended for fixing the arms; the body is interrupted below under an ellipsoidal hole in the back and in front a small protuding part at the level where the legs should begin, probably in relation with their attaching; a tiny hole at the summit of the polos would have supported some decoration (0.018-0.03; 0.075; -).

Scratched in one line on the back, from the top of the polos downwards.

0.004-0.006, not very regular letters; the circular letters are made of several strokes, the hastae of mu and upsilon exceed the height of the other letters; slanting sigma.

Found by D. White probably in 1966 in the Port of Cyrene, later Apollonia pleiades; HGL : plausibly from the West Necropolis .

The authorization of publishing this find from the Michigan expedition was given by Prof. Donald White in 2016. Having no access to the Archives of those ancient excavations, he was not able to solve the exact meaning of the label, which however should be assigned to him because of the initials 'DW' in the heading. The doll had been handed for examination to the French team by the late Head of the Apollonia site, Hadj Fadlallah Abdussalam. White having excavated in 1966 a series of tombs below the city-wall from tower II to tower IV (i.e. the first tombs of the Western Necropolis), it is highly plausible that the findspot was one of those tombs.

The attaching device for legs and arms seems too light to allow limbs made of terracotta. We suspect that they were rather made of textile.

A doll should be found in a girl's tomb, the more so if it features a female figure. The man's name at the nominative written on the back is no owner's name and might be the name of the donor. The meaning of the three last letters is unclear. Even if lambda was misread for alpha, no solution emerges and there is no room for a longer inscription. So the letters are probably acronymics, which we are not able to complete.

All citation, reuse or distribution of this work must contain a link back to DOI: http://doi.org/10.6092/UNIBO/IGCYRGVCYR and the filename (IGCyr000000 or GVCyr000), as well as the year of consultation. 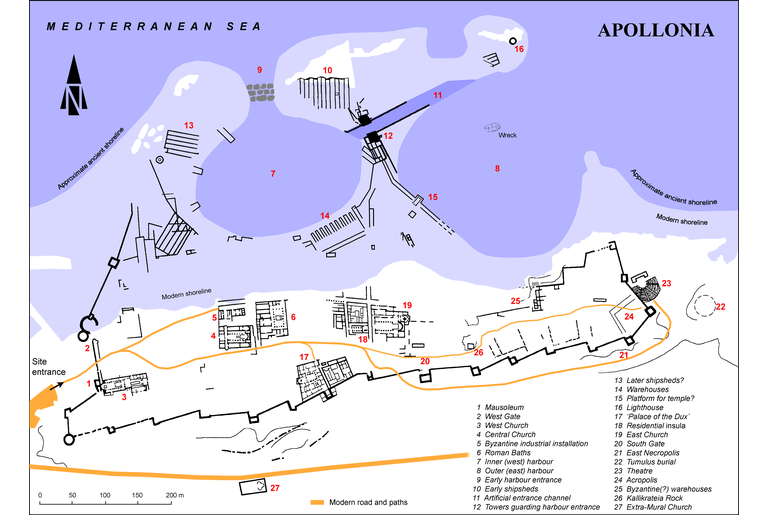